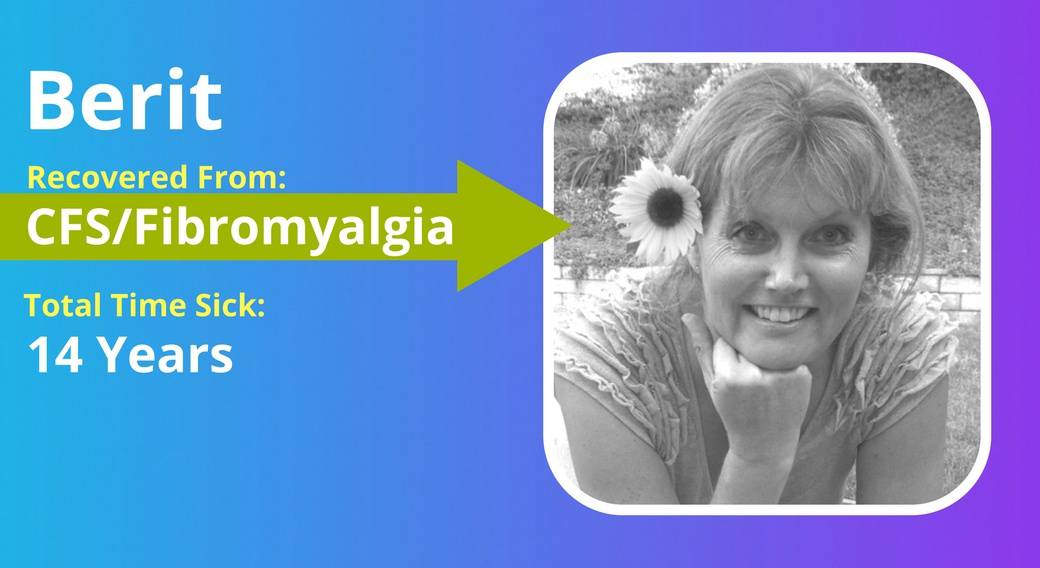 Berit, a nurse, wife and mother, was in her early thirties when her symptoms began.  She says she first saw a Rheumatologist with complaints of muscle pains and severe fatigue back in 1995.  Berit had just moved to the USA from Europe and was dealing with adapting to a new language, culture and climate.  It was a very busy time for her as she had to move several times in a relative short period of time, all whilst feeling homesick and going through a difficult pregnancy.  Then she was struck with a severe and stubborn throat infection that just wouldn’t go away.  This was the lead into Berit’s journey through Chronic Fatigue Syndrome and her experience with Fibromyalgia.

As the symptoms progressed, Berit was recommended physical therapy and started an exercise program with little benefit.  When she fell pregnant with her second child, her symptoms improved, but returned again after she stopped breast feeding.

Like so many of us, she found herself attempting to conserve energy and in the process gradually withdrawing from social events as well as struggling to keep up with the demands of daily life.   Whilst her Rheumatologist tried a variety of medications to suppress her aches and pains and to boost her energy, her concentration and her sleep, she also tried all kinds of rather expensive dietary supplements including mixed polysaccharide products, and D-ribose.

Berit also consulted an allergist who put her on a strict anti-candida diet and anti-fungal medications. This helped some of the minor symptoms, but had little effect on the pain and fatigue.  She also tried many forms of ‘complementary medicine’ including acupuncture, kinesiology and herbal supplements, – all without significant benefits.  In fact, Berit even consulted with a psychiatrist and read books on positive thinking, but experienced no significant improvement.

Her lack of concentration (“brain-fog”) was making it ever more difficult to do the things she needed to do, like driving, attending seminars and meetings, shopping, etc., and she found her life getting more and more limited by her failing health.  Berit says she often stayed home from social and school events and her husband and kids were getting used to a social life without her.

Berit found herself becoming more and more desperate for a cure.  She says she became somewhat disillusioned with what she read in the medical literature, especially that very few recoveries from CFS and Fibromyalgia were observed, particularly in patients afflicted for more than 8 years. It did not allow for much hope.

Whilst she was a member of the Chronic Fatigue and Immune Deficiency Association (CFIDS), and read all she could come across about her condition whenever she could find the strength she seemed to make little progress.

She was also treated by a specialist, a very expensive experience with an overwhelming amount of medicines and supplements, some with very questionable safety profile, and no proven benefit. This experience left her very disillusioned, with not much lasting benefit to show for the big dent in her family’s savings.

Feeling quite disillusioned and not at all ready for any new “wonder cures”, Berit says she was less than impressed when her mother wanted her to look into a program called the ‘Lightning Process’.  Her mother related the experience of a friend who had made a remarkable recovery from a 20-year illness of chronic fatigue, and having been on state disability due to her illness for most of those years.

After having tried so much without significant results to show for all her efforts, she was not ready for another let-down. The three day training session was reported to lead to such dramatic results that it sounded all too good to be true.  Encouraged by her mother and husband, however, she eventually decided to look into the program.  She did some of her own research and contacted the webmaster of a CFS/ME forum for advice.  Sustained recovery was what she was looking for, not just a temporary boost. The reports she encountered gave her significant hope. Her husband (a Cardiologist) did his own research and felt the principles of the program were sound (based on recent research on psycho-neuro-immunology), and the fact that there would be no potentially toxic drugs or life-long dependence of expensive ‘therapeutic’ agents relieved him. Berit proceeded to apply to participate in the program.   In July, 2008 she attended a 3 day session in Norway.

Berit reported pretty quick results after starting to put the techniques to practice.  She felt very hopeful as she learnt how to influence and sustain her energy, and also how to use ‘the Process’ on other issues like fibromyalgic pain, brain fog, and other related CFS issues. She was delighted with the results, but also a bit guarded, afraid of this being another fleeting experience setting her up for a disappointment when the initial ‘placebo-effect’ would wear off.

Berit says that the theory behind the Lighting Process is that people with CFS/ME often have experienced a serious infection or an other very traumatic life-event that have set off a chronic state of stress that keep draining energy and adversely affect the autonomic nervous system and the immune system.  Gaining the tools to influence/intercept this process gave Berit a sense of empowerment she had only dreamt might be possible. She soon felt confident of achieving a full recovery and experienced consistent energy and vitality that had been out of her reach for over a decade.

It has now been more than 4 years since she undertook the training, and her energy has consistently been back to the level it was before she got sick.   The mother of two says it’s amazing to have her life back.

In the years following her recovery, Berit has dedicated herself to helping other people recover and has gone to do a variety of other study and training to help her achieve results.  Her greatest joy and passion has been to be able to help other people recover from disabling Chronic Fatigue and related issues.   She is based on California and you can find out more about her help by visiting her websites at www.living-a-life-you-love.com and www.beritfrivold.com .

Never give up! Even as a child I suffered from what my mother believed were growing pains. I never seemed to have the stamina of others my age, was plagued by never ending ear infections… Even as a teacher the pains continued and became more severe. Exhaustion, nausea, irritable bowel… I saw many doctors, tried many medications, acupuncture, yoga, reiki, hypnotherapy, even a fusion of C5&6. Nothing helped, not the rheumatologists, neurosurgeon, chiropractors, acupuncturists, psychologists, pain clinic, magnetic therapy… Finally a diagnosis of Fibromyalgia, but still no help, just more pain… Contemplating spending what I was certain would be my… Read more »