Pat Gurnick Learned How To Get Well From CFS, Fibromyalgia and MCS

Pat Gurnick Learned How To Get Well From CFS, Fibromyalgia and MCS 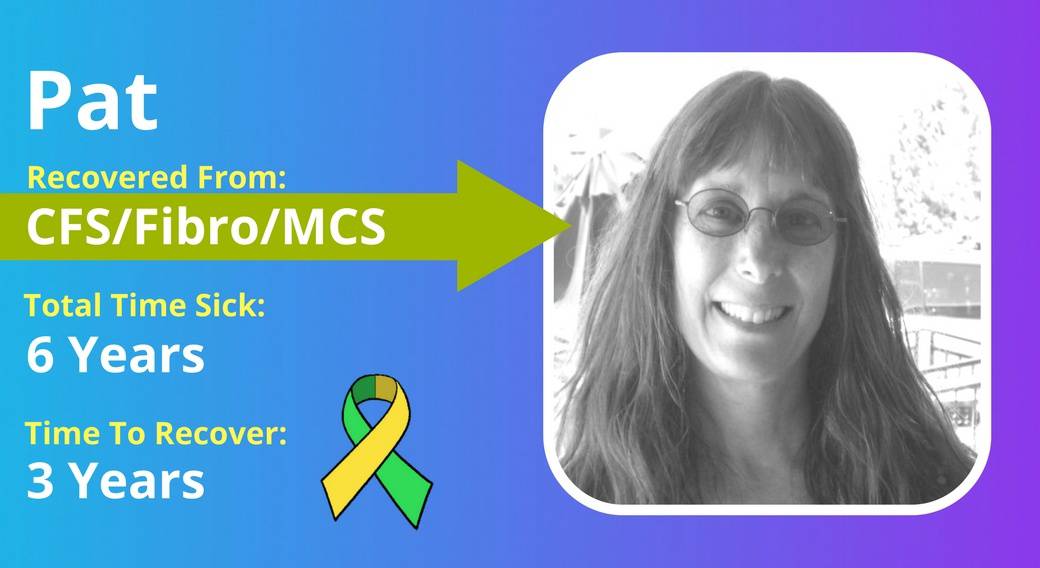 What a powerful interview with a strong lady that learned how to get well from severe CFS, Fibromyalgia and MCS.

Pat helps people cope with chronic illness, but there is no doubt about the mark the experience has left on her, even now decades after she has recovered.  Listen to her amazing interview below.

How Pat first got ME/CFS & Fibromyalgia

Pat says she will never forget the month and year she “came down with an illness of unknown origin”.  It was in January of 1990 when her life changed forever.

Pat’s car had an exhaust problem, and she says that she “naively drove with the windows open to blow the exhaust back out again”.  But one night whilst driving home from work, she drove through an aerial pesticide spraying and the chemicals came straight through her open window.  And because there was a fruit fly pandemic, the spraying occurred another 12 times over the next 5 months.

Subsequent to this, she developed debilitating fatigue, flu-like symptoms, swollen lymph nodes, fever, aches and pains, bladder and stomach problems, chronic pain (as if she had been in a horrible car crash), difficulty concentrating and major depression, to name a few.

Like most of us who have experienced CFS and Fibromyalgia, all she wanted to do is know how to get well from CFS.  But Pat quickly began the revolving door of doctor visits without much success.  But thanks to a skilful doctor who referred her, she was diagnosed with CFS & Fibromyalgia which was later reconfirmed.  This was helpful as it at least allowed her to have some proof for this “invisible illness” which is important when trying to claim disability benefits.

Six months after diagnosis, Pat switched counselling jobs, moving to Culver City, California.  Two years later, she struggled to stay above water with CFS/FM  challenges, but her health further deteriorated  as she tried to continue to work. But she still hadn’t worked how how to get well from CFS and Fibromyalgia and she eventually became so disabled that she was bedridden for a long period.

Despite many different treatments, nothing helped.  Unfortunately Pat had no idea that the inner layer of her apartment ceiling was filled with stachybotrys mold, also known as the ‘black mold’ as well as other saprophytic fungi (molds) which produced deathly mycotoxins.

As a result of the Chronic Fatigue Syndrome intensified by the mold, Pat became sicker.  She says that she could not read, write, drive, or balance well enough to stand up to even bathe herself or make her food.   She suffered from “neurally-mediated hypotension”.  Her blood pressure was erratic and dropped when she stood up and she became light-headed and unstable on her feet.  Pat was weak, in continual pain, so much so that she could not even move her arm to brush her hair. For two and a half years, she needed outside assistance.

Pat became so disturbed and miserable that she even wanted to end her life.  This is CFS/ME and Fibromyalgia truly at its worst!

Pat’s recovery like most took time.  It wasn’t an overnight treatment cure for ME/CFS or Fibromyalgia.  Instead she had to learn how to get well from CFS, how to get well from Fibromyalgia!  She changed her lifestyle in order to stay within her “energy envelope” and created a low stress environment. She learned to have better self-care and self-nurturing, making sure she looked out for herself, especially developing stronger boundaries with friends and family, doing the best she could to avoided “life’s dramas and traumas”.  Over time, she started to feel like she was transforming into a new person.

Pat describes her turning point for her Fibromyalgia using Dr. Paul St. Amand ‘s Guaifenesin Protocol and felt a change after 6 months.  After 1.2 years on the Guaifenesin protocol, Pat became pain free and to this day rarely has pain.

In terms of Pat’s Chronic Fatigue Syndrome, she finally found what worked for her (what works for one patient does not always work for another), Kutapressin (anti-viral) medication and a few other medical/holistic protocols, body/mind techniques, including strong spiritual beliefs, and within time Pat went in remission. She learned how to get well from CFS by changing her lifestyle and her thinking, not just by seeking treatments.  She beleives that she did not experience the cycle of relapse and remission because she used Dr. William Collinge’s pacing and self-regulation techniques in his CFS book (free online), and she gradually regained her health back. She has never had a relapse. Pat sees herself as a ‘survivor’ and ‘thriver’ of Chronic Fatigue Syndrome and Fibromyalgia.

Pat ran a CFIDS support group for 10 years in Los Angeles and received the ‘Honorary Recognition Award’ from the CFIDS Association.

She is a Psychotherapist and Certified Lifestyle Counselor based in Boulder, Colorado – with a specialty in ME/CFS, FM, and MCS patient education where she focusses on helping other people learn how to get well from CFS and Fibromyalgia. Pat’s stronger health status today, after years of debilitation with these illnesses, is built on her dedication to living a ‘meditative lifestyle’ and her relentless pursuit of insights from the country’s leading specialists.

Pat also seeks to share further links and resources to help ME/CFS, Fibromyalgia and MCS patients.  Her website is https://www.facebook.com/PGurnick .

​Here are some social media images for sharing: wow, such a powerful interview – I think in my case the isolation created by the illness, what can then present as the uselessness of your life, and ongoing stress, are some of the factors I seem unable yet to address in my illness, I think I really connected with this interview as I have not before found someone that had a toxic exposure that set off their condition, but gee when at the end Pat thanked you as one survivor to another it really impacted me – the depth of this illness is unbelievable – thankyou both

Hi Jen,
I am glad that the interview resonated with you – yes, it has a huge impact on us, not just physically, but also emotionally and perhaps even spiritually.
Hope it brings you a step closer to moving forward with recovery and taking some new steps in the right direction. 🙂

Thank you for sharing, this has been very helpful, as has been your book. I really appreciate that you share stories on all pathways to recovery, not just push your program. I have read your book and it really helped me understand my illness, and thanks to that understanding my recovery is proceeding well. This interview has been very reassuring that I am on the right path. I too have used Collinge and I think pacing with developing insight into yourself, and having compassion for yourself to take time to recover is critical. Thank you to you and Pat for… Read more »

Thanks Heather
I was doing all this way before the ANS REWIRE program.
Only started to publish some of the ANS REWIRE recoveries lately – my favorite stories are actually still those where people found their own path to recovery!
Having said, I continue to publish interviews with people that used ‘competitor’ programs and recovered – cfsunravelled.com is all about showing people it’s possible to recover and helping them find their way, regardless of whether that is ANS REWIRE, another program or their own path. 🙂

I can totally relate to the desperation Pat describes, when you get to the point where you’re desperate enough to try absolutely anything. Thanks for these recovery interviews Dan, they are an integral part of my recovery alongside your ANS Rewire program. I keep listening to the interviews over and over, and glean something new each time, or hear something that speaks to where I’m at with recovery.

Thanks hun. Been 8 years. Definitely better but not able to work. I’ve tried alot of things. One day, I’ll be well thanks to people like you and Dan

Thanks so much Pat and you too Dan.l loved this interview ❣ Pat was so very ill and yet she has recovered,this gives me hope and confidence in my own potential to achieve the same result.Much gratitude 🌈

Great to hear it supported you.